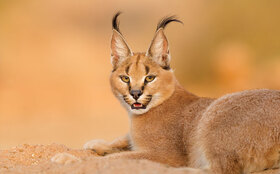 The Greater Flamingo has long, thin legs and neck and a downward-bending beak. It is the largest and palest of the flamingo species. Juveniles are grey-brown, and their plumage turns pink at the age of two. They are a highly social species, nesting in large, dense colonies.

Where they're found today

The Greater Flamingo occurs in West Africa throughout the Mediterranean to the Southwest and South Asia, and throughout sub-Saharan Africa, Iran, Kazakhstan and the Middle East.

The Al Wathba Wetland Reserve is the only site in the Arabian Gulf where the Greater Flamingo regularly breeds. EAD has ensured the long-term survival of the species by protecting important sites like the Al Wathba Wetland Reserve, the Mangrove National Park and Bul Syayeef Marine Protected area. In addition, the UAE has joined the Convention on Migratory Species (CMS) in 2016, which further underlines our commitment to saving migratory species including the Greater Flamingo.

In 2018, to mark the Year of Zayed, EAD launched an intiative called the Abu Dhabi Birdathon, in partnership with Etihad Airways. 10 government entities were engaged as they followed the journeys of 10 flamingos that tagged and released from Al Wathba Wetland Reserve. One of the flamingos travelled 1,300 kilometres to Iran, another travelled over 200 kilometers to the Ras Al Khor Wildlife Sanctuary in Dubai, while others remained in the UAE and Al Wathba.