His Highness Sheikh Hamdan bin Zayed Al Nahyan, Ruler's Representative in Al Dhafra Region and Chairman of the Board of Directors of the Environment Agency – Abu Dhabi, praised the emirate’s achievements, led by the Agency, in the field of rehabilitation of coastal and marine ecosystems. 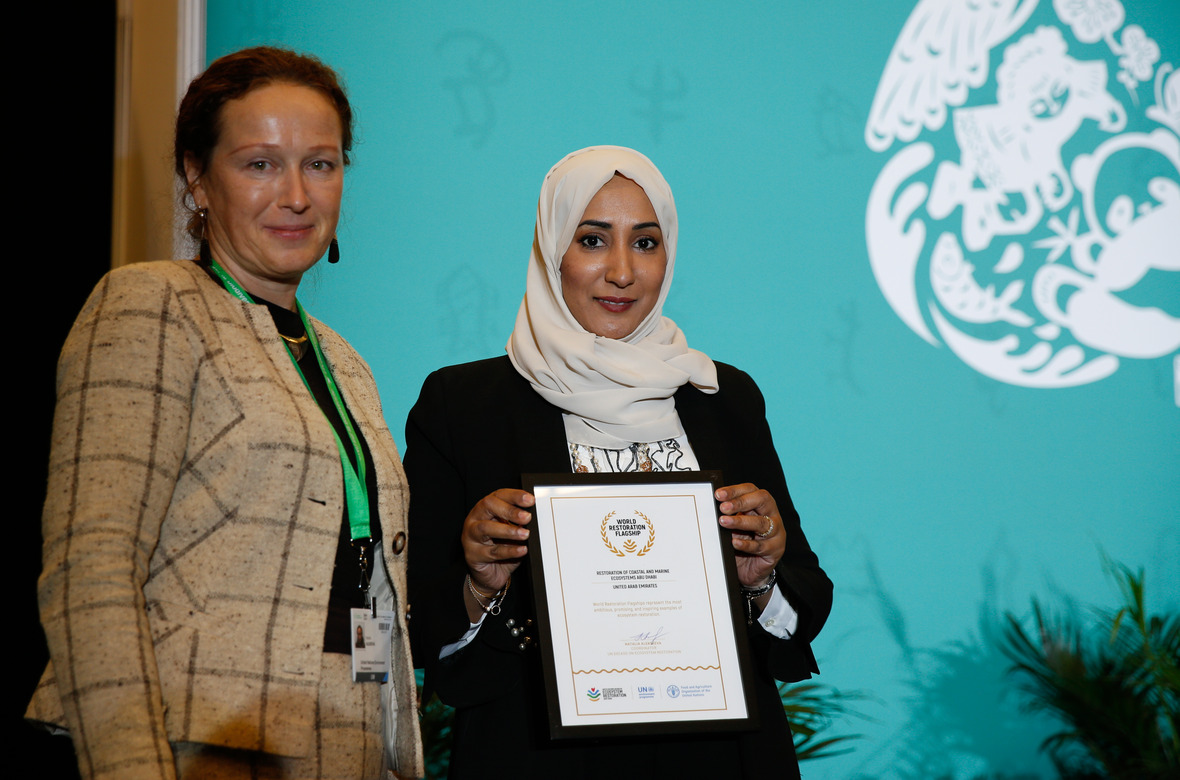 UAE, Abu Dhabi - December 14, 2022: His Highness Sheikh Hamdan bin Zayed Al Nahyan, Ruler's Representative in Al Dhafra Region and Chairman of the Board of Directors of the Environment Agency – Abu Dhabi, praised the emirate’s achievements, led by the Agency, in the field of rehabilitation of coastal and marine ecosystems.

These efforts have strengthened the emirate’s leadership in preserving marine biodiversity in line with Abu Dhabi’s strategic environmental goals, which were inspired by the founding father Sheikh Zayed bin Sultan Al Nahyan, as well as the wise directives laid down by the late Sheikh Khalifa bin Zayed Al Nahyan. The initiatives also continue on the pathway set by His Highness Sheikh Mohammed bin Zayed Al Nahyan, President of the United Arab Emirates.

His Highness stated: “Abu Dhabi has confirmed its leadership and succeeded in strengthening its global position in the field of preserving the environment and protecting species, as well as implementing plans and programmes to restore and rehabilitate them.”

His Highness Sheikh Hamdan added: “We have worked in several directions to sustain our marine environments and have succeeded in restoring our fish stocks, strengthened our plans to plant and rehabilitate mangroves, and launched the region’s largest coral reef rehabilitation project – all of which further emphasizes the emirate’s important role at both a local and global level in the conservation of species and their ecosystems. Efforts and resources are being directed to serve the goals of sustainable development and to preserve natural resources and ensure their sustainability for future generations.”

His Highness shared his comments on the occasion of the United Nations Environment Program's announcement, which saw EAD-led programmes in Abu Dhabi named among the top ten list of global initiatives to restore and rehabilitate coastal marine ecosystems. The announcement was made on the sidelines of the high-profile meetings of the UN Biodiversity Conference (CBD COP15), which took place from December 13-17 in Montreal, Canada.

These programmes to preserve and rehabilitate coastal and marine ecosystems programmes were selected following evaluations conducted in accordance with UNEP’s standards and requirements, proving some of the most promising and ambitious and viewed as pioneering models at the global level. The selection was made from among more than 150 candidates from different countries, and approved by 70 government agencies, as a result of the Agency’s distinguished efforts in rehabilitating the unique biodiversity habitats of Abu Dhabi’s coasts and waters for endangered marine animal species and local communities.

Her Excellency Dr. Shaikha Salem Al Dhaheri, Secretary General of the Environment Agency – Abu Dhabi, said: “Our marine habitats thrive despite the challenges they face due to high temperatures and increased salinity in the emirate’s waters – which is unique in a world where the effects of climate change are increasing. In light of the pressures that our natural habitats face due to the rapid development in the region, as well as coastal development activities and projects related to housing, tourism and infrastructure – which have impacted critical coastal and marine habitats – we have taken proactive measures to balance the requirements of economic and social development, sustainable exploitation of resources, and the development of rehabilitation initiatives and ecosystem restoration within the framework of the emirate's plans and strategies.”

Her Excellency elaborated: “The initiatives and programmes launched and implemented by EAD since its inception attracted UNEP's attention and led to its recognition as a pioneer in the field of rehabilitation and the restoration of ecosystems. Our success story includes a remarkable improvement in our fish stocks, plus significant achievements in the field of mangrove, seagrass, and coral reef rehabilitation, which are among Abu Dhabi’s most important and productive marine habitats that support biodiversity and provide a natural habitat for several types of fish and marine organisms.”

The Agency participated in UNEP’s inaugural session to select the ten best leading initiatives to prevent and reverse the degradation of environmental ecosystems around the world by reviewing the distinguished efforts of the programmes it implements at the local and international levels in promoting and protecting environmental systems. The Agency also assists in international efforts and fulfils its obligations stipulated in international environmental conventions and treaties. All these initiatives are among the priorities set forth in EAD’s strategic plans to support objectives derived from the leadership's wise vision that aspires to make Abu Dhabi a world leader in preserving the environment.

The coastal and marine areas of Abu Dhabi, located on the southern border of the Arabian Gulf, are considered a hotspot for biodiversity, housing various habitats that support a wide range of marine species and large fish. The Agency has worked to improve the condition of deteriorating fish stocks that had been depleted by up to 85 per cent according to its studies and surveys.

Implementing EAD's guidance in this context helped protect fish stocks, with data showing that Abu Dhabi is on track to achieve its goal of sustainable fisheries by 2030. An improvement has also been achieved in the sustainable fishing index for three consecutive years, rising from 8.9 per cent in 2018 to 62.3 per cent by the end of 2021. The Agency will continue working to ensure the recovery of fisheries, while achieving a level of sustainable fishing.

Efforts made by the Agency to establish and manage natural reserves through the Sheikh Zayed Protected Area Network, which comprises six marine reserves representing 14 per cent of the emirate’s marine environment, have also contributed to preserving biodiversity in Abu Dhabi, ensuring the sustainability of resources and promoting associated social and economic development.

These efforts have generated positive results for a number of habitats and species, helping to stabilize important organisms and increase the number of birds such as flamingos, and stabilize important marine habitats such as coral reefs – for which the Authority launched a special rehabilitation initiative. The Agency has also launched the region’s largest coral reef rehabilitation project, with the aim of cultivating more than one million colonies of coral reefs to increase their area and mitigate the pressures on coral reefs as a result of climate change and rising temperatures at the sea floor.

The Agency also focused its efforts on protecting mangroves through targeted programmes for planting and rehabilitating mangrove areas and using modern technologies in agriculture, such as drones. These initiatives were recognized by the World Economic Forum as one of the most innovative in the field of blue carbon sequestration. Over the past 10 years, 15 million mangrove trees were planted, contributing to more than a 35 per cent increase in the area of Abu Dhabi’s mangrove trees, which today exceeds 176 square kilometers, including natural and cultivated trees. Studies conducted by the Agency revealed the ability of mangroves in Abu Dhabi to store carbon at a rate of 0.5 tons per hectare annually, which is equivalent to 8,750 tons at the emirate level, and to the energy consumption of 1,000 homes per year.

The Environment Agency – Abu Dhabi's efforts also led to the preservation of the integrity of the emirate’s seagrass meadows, contributing to the stability of dugong numbers in their natural habitats. Abu Dhabi is home to the second-largest group of dugongs, with numbers exceeding 3,000 – the highest density per square metre in the Arabian Gulf region.

Studies also showed an improvement in the number of turtles and their stability in the emirate in recent years, with numbers estimated at about 5,000 hawksbill turtles, green turtles and loggerhead turtles. The Agency’s efforts also ensured protection of three types of dolphins and one type of porpoise, with the emirate’s waters hosting a population of more than 700 dolphins, most of which live in marine protected areas – including the largest group of Indian Ocean humpback dolphins in the world.
X
Cookies help us improve your website experience.
By using our website, you agree to our use of cookies.
Confirm