The Environment Agency – Abu Dhabi (EAD) and ENGIE, the global energy company, announced the success of the second phase of the "Blue Carbon" Environmental and Social Responsibility project, in partnership with Distant Imagery. Using highly innovative drone planting technology, more than 35,000 mangrove seeds were planted in the Mirfa lagoon in Abu Dhabi 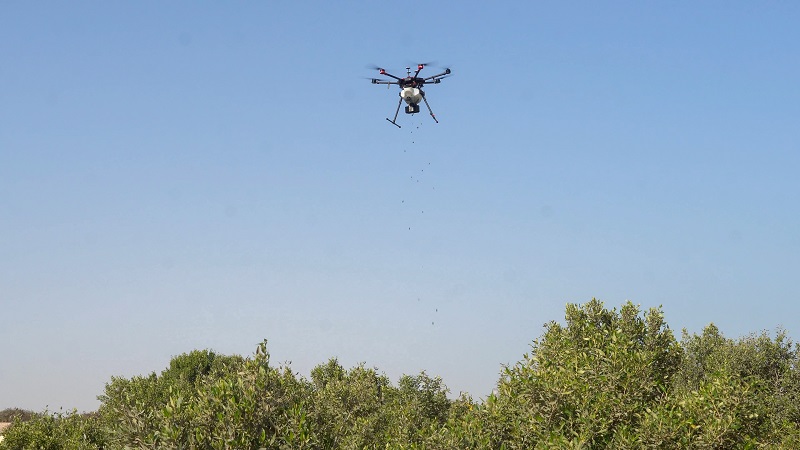 Ahmed Al Hashemi, Executive Director, Terrestrial and Marine Biodiversity Sector, EAD, said, “We are always eager to play an impactful role in tackling climate change in line with the vision of the UAE, which has now become a leader in the field. Moreover, the conservation of plant species is also a priority for us. The Blue Carbon project successfully combines our focus on these priorities and will contribute to achieving the Net Zero 2050 strategic initiative announced by the UAE government.”

Al Hashemi went on to add, “After our success in the first phase of the project, we used a more robust and evidence-based approach from lessons learnt. This project is extremely innovative as planting via drones is a relatively new concept, which can greatly help rehabilitate and expand mangroves in Abu Dhabi, especially in remote areas which are difficult to reach using traditional planting methods. We are striving for a success rate of 35%, which would be a win for us at EAD in partnership with ENGIE.”

Florence Fontani, Vice President Communications and Sustainability, ENGIE Africa, Middle East, and Asia (AMEA), said, “Rehabilitating mangrove ecosystems is an effective way to mitigate the effects of climate change and restore natural habitats and biodiversity. At ENGIE, we are honored to be involved in such an impactful project that contributes to the UAE's carbon-neutral goals and promotes sustainable development for a greener future for generations to come."

The Mangrove Rehabilitation project, initiated in 2020, was a successful pilot project where approximately a hectare of coastline was planted with mangrove seed balls via specialized engineered drone rigging. The mangrove seeds were then monitored monthly for growth over a year.

The second phase involved further refined drone rigging and planting germinated mangrove seeds and seed balls to scale up the mangroves. The use of drones was crucial during each step of the project. They assisted in evaluating the above-ground environmental conditions, spatial arrangements, and ability to geo-map the site. Drones provide an efficient and fast method for dropping seeds at speeds of about 2,000 seeds per load. For the planting, Distant Imagery developed three different seed-dropping mechanisms based on soil, elevation, and tidal characteristics, with the objective to enhance success rate.

EAD will continue to support the project by actively monitoring the health of the mangroves.

ENGIE aims to enable governments and businesses to accelerate the transition toward a carbon-neutral economy and supports long-term sustainable solutions.